This guide will assist you in understanding how to reference for your assignment. It contains examples to help you format your footnotes and bibliography.

The Australian Guide to Legal Citation 4th edition (AGLC 4) is a numbered style, meaning in-text citations are represented by a superscript number 1, 3, 8 and the details of the citation are included in a footnote in the body of your assignment. Where a bibliography is required, it should list all the citations used and other sources that were relied upon, organised alphabetically in sections, and placed at the end of your assignment.

A v B [Year] Report Volume.

Delegated (Federal) or Subordinate (state) Legislation should be cited in the same manner as primary legislation.

Reproduced in a report series

Not from a report series

Treaty between Australia and the Democratic Republic of Timor-Leste establishing their maritime Boundaries in the Timor sea, Australia-Timor-Leste Signed 6 March 2018, (not yet in force).

Canadian cases should be cited as per domestic Australian cases, substituting the name of the appropriate law report.

Helen O’Sullivan, ‘The Right to Silence at Trial: A Critique and a Call for a New approach’ (PhD Thesis, Griffith University, 2007).

Body text,1 some other body text.2

Arbitral tribunals are empowered to make orders to preserve the integrity of their own proceedings.1 While this power is usually explicitly conferred by arbitral rules,2 it is in any event a power inherently held by the tribunal.3

Consult the manual and authoritative web sites for more information.

In regards to the German civil code, Zimmermann and Du Plessis state general enrichment was 'the most outstanding feature of the German law of unjustified enrichment'.1
The legislation2 indicates that.....
The Court held in Alati v Kruger3 that...

Where a bibliography is required it lists all sources that were relied upon, not just those cited in-text or in footnotes. Place the bibliography on a new page at the end of your assignment and centre the heading of "Bibliography".

Treaty between Australia and the Democratic Republic of Timor-Leste establishing their maritime Boundaries in the Timor sea, Australia-Timor-Leste Signed 6 March 2018, (not yet in force)

Convention against Torture and Other Cruel, Inhuman or Degrading Treatment or Punishment, opened for signature 10 December 1984, 1465 UNTS 85 (entered into force 26 June 1987) 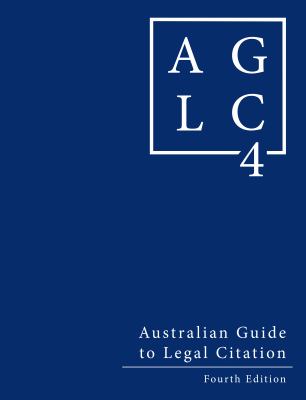 How to print or save a copy of this guide

We recommend you print or save using a different browser. Edge will not capture the whole guide (only the open accordion).

Referencing information is provided as a guide only and is based on the official manual or other authoritative sources where available. Users are directed to confirm specific referencing requirements with their course convenor and to consult the manual directly for more information.

Smarthinking is a free 24/7 online tutoring service available to all Griffith students seeking advice on improving their writing skills. Students can submit their assignment draft for review and receive a response in 24 hours. Smarthinking and Study Smart are your first step​s​ to improving your writing and study skills.

Library specialists can assist you with improving your academic writing, study skills, referencing, and research needs.  This includes referrals with a learning adviser for an Academic Integrity breach. If needed, we can arrange a time to talk to you by phone or online.

Get help from the library

We are here to help!

Or you can ask our friendly staff about Library products and services. Find us in the libraries or contact us by phone, email or chat.