Benefit from our powerful partnerships

As an education student, you'll find yourself connected to the education industry from the start of your studies. Our strong ongoing relationships with schools and industry partners around Australia have been nurtured and developed during the past 50 years.

You'll have the opportunity to engage with experts who are moving education forward in priority areas including STEAM education, digital coding, literacy, wellbeing and early childhood education.

As the home of four Australian University Teachers of the Year, Griffith has a proud history of driving innovation and achievement in higher education. Our teachers and researchers have won more national awards in the past five years than any other university’s staff, and our students who learn in this environment are renowned among employers for their skills, experience and work ethic.

Associate Professor Kevin Larkin who was named the 2018 Australian University Teacher of the Year by Universities Australia, and Dean and Head of the School, Professor Donna Pendergast, who was awarded the Miller-Grassie Award for Outstanding Leadership in Education.

Pacific Pines Primary School teacher and Griffith education graduate Natalie Anderson has won the Queensland College of Teachers Excellence in Teaching Award for her work in inspiring young girls in science and technology.

The Year 4 teacher and leader of the PPP robotics and dance clubs, has set up school partnerships with Google, IBM, Cancer Council Queensland, BOP Industries (hologram), Suncayr and Technology One. This year she was awarded a RMIT scholarship to study Apple Swift Programming.

After graduating from her Primary Education degree in 2014, Krystal began her teaching career at the Tagai State College campus on Saibai Island, which is just 4km away from Papua New Guinea. After just one year of teaching on one of the state’s most remote islands, Krystal Flynn started a Masters degree focusing on languages in her local community. Her analysis of Yumplatok – the Torres Strait Islander Creole – and Kalaw Kawaw Ya, a dialect of Kala Lagaw Ya, which is spoken on Saibai Island, is informing her teaching in the classroom. James is a proud primary teacher at Woodridge State School and Griffith University graduate. "I chose to study at Griffith as all of the teachers I knew in the profession, constantly raved about how prepared Griffith students are when completing practicums."

As an early career teacher, James relocated to Doomadgee, a remote Indigenous community where he developed and refined his teaching skills. During that time, James harnessed many professional development opportunities including Take the Lead, a Department of Education program for aspiring principals, which led him to a small school principal role in North Queensland.

James is passionate about creating positive change and ensuring students adopt a growth mindset. "If you want to come to work every day knowing that what you do is truly valued and has a direct impact on people’s lives, this is the profession for you." Jake, who won the 2018 World Skipping Championships in Shanghai, has been skipping competitively since he was  nine-years-old. He has a unique way of engaging his students in learning by teaching them how to skip with a focus on goal-setting.

Jake took a year off after year 12 because he wasn’t sure what he wanted to do. In his gap year he was working closely with his skipping coach, also a primary school teacher. and helped her with some choreography for her class play and school musical. “She said I was brilliant with kids and recommended I study primary education, so I applied to Griffith. The rest is history.”

Jake credits the Griffith Sports College with helping to balance his university and sporting commitments.

Johnathon graduated from Griffith in 2015 and secured a job immediately as a Year 5 teacher at Trinity Lutheran College. He is passionate about inspiring his students to succeed and overcome obstacles and challenges, and making a difference in the lives of each and every one of his students.

Jillian worked in environmental science and decided to make the career change into teaching so she could make a positive impact in the classroom. She completed the Griffith Graduate Diploma in Education and now works as a Secondary Science and Maths teacher at Helensvale State High School. Jillian believes the best part of being a teacher is showing kids that they can achieve success in things that they might not have normally tried or already believed that they couldn't do.

Saurubh graduated with a Master of Teaching in 2008. On completion of his study, Saurubh managed not-for-profit organisation Outside School Hours Care (OSHC), where under his leadership, moved from a struggling service to being awarded Super Site by the Active After School Communities (commissioned by Australian Government).  In 2014, Saurubh founded not-for-profit organisation, We Belong to provide children in need with social and emotional learning opportunities through play-based activities. 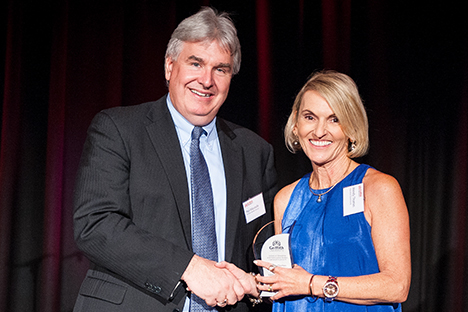 Bachelor of Education graduate Wendy Thomas' work focuses on improving the lives of hundreds of children through the Titans Learning Centre (TLC) program. Wendy is the Foundation Teacher of the program, an approved alternative schooling partnership between Queensland’s Department of Education and Training and the Gold Coast Titans Rugby League Club. Participants in the TLC are students in Years 3 and 4 who are at risk of disengaging from their learning due to low self-esteem, poor self-image, high anxiety and social difficulties.