As Foundation Vice Chancellor for twelve years, Professor Willett was largely responsible for the development of a new and distinctive Australian university. Professor Webb worked tirelessly over seventeen years to take Griffith from a single-campus institution of 4,000 students through a significant period of change to become a diverse, multi-campus institution of 26,000 students spanning the Brisbane-Gold Coast corridor. Professor Davis spent nearly twenty years at Griffith joining as a lecturer in 1985 before becoming Vice Chancellor in 2002. Professor O'Connor provided leadership over a fourteen period during which Griffith developed a comprehensive academic profile and emerged as a research-intensive university - rising to the Top 300 on major world university rankings.

Professor Ian O’Connor was appointed Vice Chancellor and President of Griffith University in January 2005, taking the helm of one of Australia’s largest and most innovative tertiary institutions. Now home to more than 50,000 students from more than 130 countries, the University is one of the Asia-Pacific region’s most influential universities with research strengths in areas that address the key issues of our time.

Prior to his appointment as Vice Chancellor, Professor O’Connor joined Griffith University as Deputy Vice Chancellor (Teaching and Learning) in 2002.

Following completion of degrees of Bachelor of Social Work and Doctor of Philosophy from the University of Queensland, he held various academic appointments there including Head of the Department of Social Work and Social Policy and President of the Academic Board.

Professor O’Connor is published in the field of juvenile justice, child welfare and the future directions of social work and the human services.

Professor O’Connor is a board member of Open Universities Australia, Trade and Investment Queensland, the Foundation for Australian Studies in China, and the Foundation for Australia-Japan Studies. He is chair of the Higher Education Standards Panel and of the Queensland Art Gallery Board of Trustees, and is a member of the Legacy Advisory Committee for the Gold Coast 2018 Commonwealth Games.

Professor Davis spent nearly twenty years at Griffith, joining as a lecturer in Public Policy in 1985 and before being appointed as a Professor in 1998.

While at Griffith, Professor Davis was awarded the Harkness Fellowship for 1987-1988 to the United States of America and worked at the University of California Berkeley, the Brookings Institution in Washington and the Kennedy School of Government at Harvard University.

He also undertook secondments to work in the public sector. Professor Davis held senior posts with the Queensland Government as Commissioner for Public Sector Equity with the Public Sector Management Commission (1990-1993), Director-General of the Office of the Cabinet (1995-1996) and Director-General of the Department of the Premier and Cabinet (1998-2002).

When Professor Emeritus L. Roy Webb AO took up his appointment as the second Vice Chancellor of Griffith University on 7 January 1985 few could have guessed the changes and challenges that the Australian higher education sector and Griffith would face.

During his 17 years in office, Professor Webb developed a clear vision for Griffith as a multi-campus University serving the Brisbane-Gold Coast corridor and as an institution dedicated to excellence and innovation. At the time of his retirement Professor Webb was the longest serving Vice Chancellor of an Australian university.

Professor Webb was a major driving force in developing and expanding the identity of Griffith University at both a national and an international level. His work to bring Griffith into a new and radical era of education saw Griffith expand its student body, campuses, and program offerings exponentially. As Vice Chancellor, Professor Webb provided many opportunities to improve the research culture at Griffith. During his tenure, over 50 specialised research centres, institutes and units were established as Professor Webb expanded Griffith's educational and research boundaries. His dedication to the improvement of Griffith's international standing produced many of the educational and business links that the University now enjoys.

The University named the Webb Centre at the Queensland College of Art, South Bank in his honour and has conferred on him the honorary degree of Doctor of the University and the title Professor Emeritus. In recognition of his service to higher education, Professor Webb was made an Officer of the Order of Australia on the Queen's Birthday 2003.

As Vice Chancellor, Professor Willett developed the foundations for the new kind of university envisaged by the Interim Council, devoting himself tirelessly to the task of building a university that was alternate and yet complementary to other universities within Brisbane.

The University honoured Professor Willett with the title Professor Emeritus, the honorary degree of Doctor of the University, and later by renaming the Information Services Centre on the Nathan Campus as the Willett Centre. 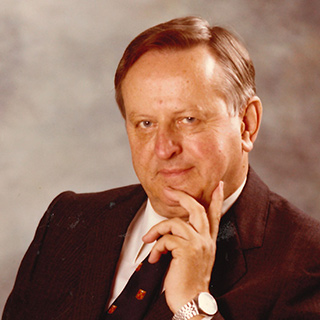