Our Alumni are making a difference in the community

School of Criminology and Criminal Justice alumni work across a diverse range of fields that all make impactful change on the criminal justice system. Our alumni work within both government and non-government agencies to tackle crime and related issues at each stage.

We encourage you to join our alumni community and network, access careers services and alumni benefits, share research and engage in social events.

Network with fellow alumni and academics as well as industry professionals.

Since graduating in 1996, Commissioner Katarina Carroll has dedicated her career to public safety, serving with the Queensland Police Service for over 30 years. in 2015, Katarina was appointed as Australia's first female commissioner of the Queensland Fire and Emergency Services. From 2012 to 2014, Katarina was in charge of planning and the Operations Commander for the largest security operation in Australia's History - G20, leading 6,700 police officers and providing security for 26 world leaders.

Katarina is the recipient of a number of national and international awards including the Australian Police Medical in 2008, Premier's Award for Excellence in Leadership and the State winner of the Australian Business Woman of the year - government and Academia in 2015. She was also awarded the Leadership Award from the International Association of Women in Police in 2015. 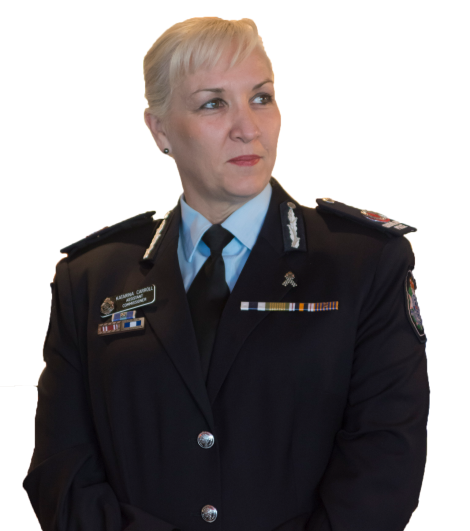 Commissioner Katarina Carroll has dedicated her career to public safety, serving with the Queensland Police Service (QPS) for over 30 years.

Tygh was the Criminology Young Alumnus of the Year for 2016 and is the Director of Operations, Probation and Parole for the Queensland Corrective Services Commission.

Young Australian of the Year 2009

Criminology and Forensic Science graduate Lucy Farrell focused on cybercrime during her Honours year which helped her move into her current position within Specialist Operations at the Australian Federal Police.

Nicole’s passion for forensics started when she was 10 and would secretly watch CSI. This led her to study at Griffith University and into her dream job as a forensic biologist.

Since graduating in 2015, Mary Beriman has worked her way up within Corrective Services from a Case Manager to Advisor to Office of the Commissioner.

Jade Pereira is an Assistant Intelligence Analyst for the CCC in Queensland. She believes Griffith University's industry links and connections helped her to get where she is today.

Keep in touch with our criminology community.