A pioneer in the Australian Football League

With two Griffith degrees behind her, Fiona McLarty is a highly educated and respected pioneer in the Australia Football League.

After many influential years in the sport, in 2018 Fiona was appointed as the first Head Of Womens Football at the Gold Coast SUNS. And in late 2019, she has brought together all 30 female recruits for the first time, in preparation and anticipation of the 2020 AFLW season.

McLarty said it had been a hectic 12 months building the AFLW’s newest expansion club from the ground up, which included picking up eight players in the draft last month.

The SUNS’ AFLW team’s first training session is on November 25 and McLarty is very eager to get the team together and further establish the team discipline and work ethic.

“We actually haven't had all 30 together as a group yet,” McLarty said.

“Over the last 12 months, it's been all about building the team of staff and players, so I just can't wait to get everyone together for the first time.

“We want to, obviously, set up and establish our culture, bring it all together, but we also want to be really competitive on field, and we think we will be.”

From her initial days as one of the first players in the women’s competition, to now leading the Gold Coast’s only elite national women’s sporting team, Fiona McLarty is no stranger to big challenges.

She started her career working for AFL Queensland in the Gold Coast region, followed by roles at the state and national level.

“Then to come back here to work for the Gold Coast SUNS and the club, it's almost like I've come full circle,” she said.

“It’s really exciting and you actually have to remind yourselves how quickly it's happened.

“So 2001, when I started working for the AFL, was when they first had a structured women's competition, and there was only four teams and we would play every second week.

“I think we played maybe six games across the season and that was it.

“So now, I think Queensland's got 40 per cent female participation across their programs and there's no reason why we can't be 50/50 male-female in years to come. It's just so exciting to see and it's been a real privilege, I think, to see that progression and to see the girls come through the pathway.

“We see it as a great responsibility for what we can do for the Gold Coast. The fact that young girls and families, young boys, don't have to travel to Brisbane or to the Sunshine Coast to see people competing at the top level. If we can do it here on the Gold Coast, it's a great opportunity and something that we take really seriously.” 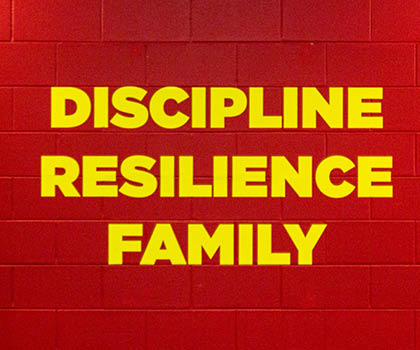 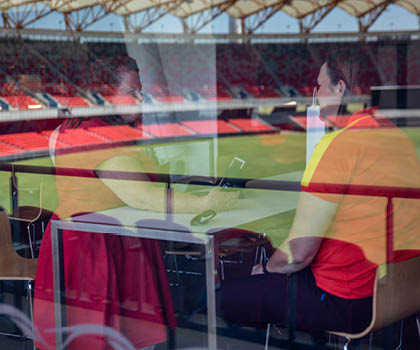 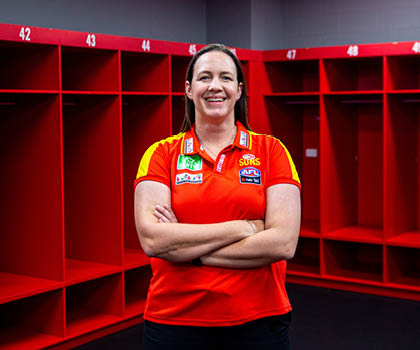 The Griffith University graduate completed not one but two degrees at the Gold Coast campus, to ensure her career progression through the AFL over the past 19 years. She’s also excited by the ongoing links to Griffith University with 23 of the club’s mens and womens players part of Griffith College’s Elite Athlete Program.

It’s all part of Griffith University’s commitment as Research and Education partner of the Gold Coast SUNS.

“It's got a really big presence. It's really good for us to be aligned with them and just the opportunities that we provide for the students too.

“Griffith, with its Sports College is just amazing, and the support that they give people, working around training and games and commitments, is just fantastic. So even this year, through our lead up, with some of our female players that were involved, the team was great at supporting them through that. I'm a bit jealous. I wish there was something like that when I went through university and there wasn't. It's great and actually makes it easy for the players to study while they're playing.”

From the list of 30 AFLW SUNS’ players, 22 are from Queensland, which McLarty hopes will overcome some of the criticisms the SUNS’ men's team receives.

“A lot of the media talk about, over the years, how the men's team has had a `go-home factor’,” she said.

“We've actually brought people back here, so the go-home factor has actually been people coming back to the Gold Coast SUNS.

“Our recruiting ground will be here. It'll be South East Queensland, North Queensland, where we run academy programs. And then we've just formed a partnership with the Northern Territory. But we'll be looking at our own backyard for our talent. We won't need to look in the other states.

“We actually had seven players come from Brisbane, but the majority of them are actually coming home, so I think even Brisbane knew that a few of those players may have been on loan to them for a little while because of some of our academy products that came through, so it was really nice for them to be able to come home and come back to the Gold Coast.”

In this episode of Remarkable Tales, Fiona tells us about her newly created role as the Gold Coast SUNS Head of Women’s Football, and is revelling in establishing a culture and work ethic for her AFLW team.