Dinesh Palipana was a high achieving medicine student at Griffith University, until a road traffic accident in 2010 left him with a spinal cord injury and quadriplegia.

His car aquaplaned near highway roadworks, went up an embankment, flipped several times top to tail and when it stopped, he was left without feeling or movement from the chest down.

In a unique turn of events, the first doctor on scene was the very Doctor who had given Dinesh a lecture on trauma just a short while before the accident.

After being cut out of his car by firefighters and rushed to hospital for emergency surgery, he remained unconscious in the intensive care unit for a few days.

“In those first days in the ICU, the waiting room was full of people from my class at Griffith. We were really like a family,” Dinesh recalled.

The Dean of Griffith’s Medical School also visited Dinesh in hospital and encouraged him to focus on his recovery before returning to his studies with the support of Griffith and his peers.

However, when faced with the daunting prospect of living life as a quadriplegic, Dinesh chose to return to his home country of Sri Lanka to recuperate and re-learn everyday basics like eating and moving his arms. With the support of his family, he later returned to Australia to finish his Doctor of Medicine degree, triumphantly graduating in 2016.

“From the second it happened, even when I was in the ambulance, I didn’t have a single doubt about finishing my studies at Griffith, it was just a matter of when," Dr Palipana said.

Dr Palipana’s name has deservedly been up in lights ever since, with a wave of media interest starting on the brink of his burgeoning medical career.

“When I graduated and was registered to practice, the employing state health organisation was reluctant to give me an otherwise guaranteed internship.

“Eventually they did, and in 2018, I was awarded Junior Doctor of the Year at Gold Coast University Hospital before becoming senior resident in the busiest Australian emergency department."

Dr Palipana now draws upon his experiences as a patient, to refine his own medical practises and make his patients feel as comfortable and in control as possible.

“What really gave meaning to all the challenges I overcame was when a patient with a significant disability told me he was glad I was treating him, because he knew I would understand his issues.”

Dr Palipana is now renowned for being the first quadriplegic medical intern in Queensland, only the second person with quadriplegia to graduate as a doctor in Australia and the first person to do so with spinal cord injury.

As a proud Griffith alumnus, Dr Palipana has never forgotten the support his Griffith peers and teachers gave him through his recovery. His ties to Griffith remain strong and he consistently and keenly gives back to his Griffith networks by volunteering his time, knowledge and financial support to students, alumni and research teams.

Outside his hours as a resident medical officer at the Gold Coast University Hospital, Dr Palipana is a now also a lecturer at Griffith and an adjunct research fellow at Griffith’s Menzies Health Institute of Queensland.

In these roles, Dr Palipana has made significant contributions to scientific advances in treating spinal cord injury and restoring function to people with paralysis as Co-lead of the BioSpine Project.

“Imagine using your mind to drive movement in your muscles despite previously insurmountable obstacles like quadriplegia,” Dr Palipana said.

“BioSpine puts together some of the most promising advances in human history for spinal cord injury.

“We are using thought control, electrical simulation, and drug therapy in an attempt to restore function in paralysis.” 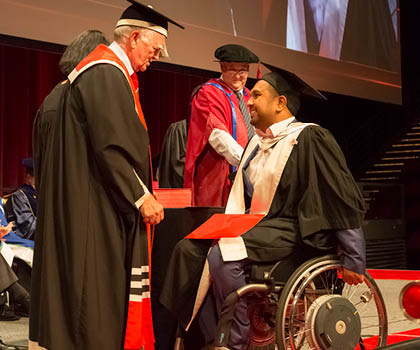 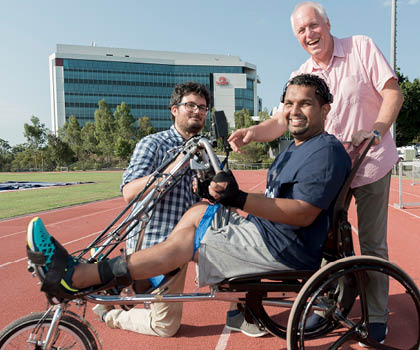 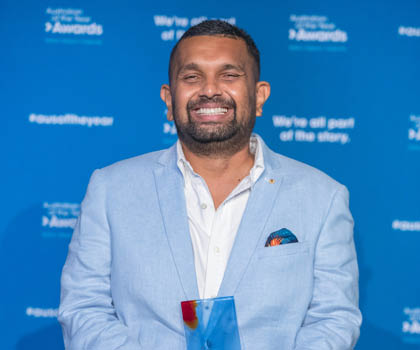 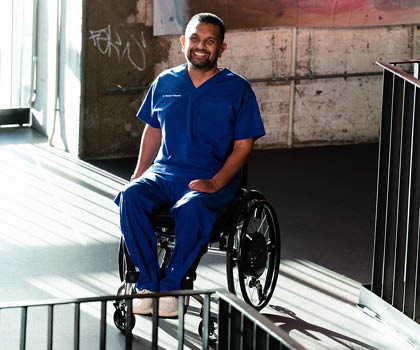 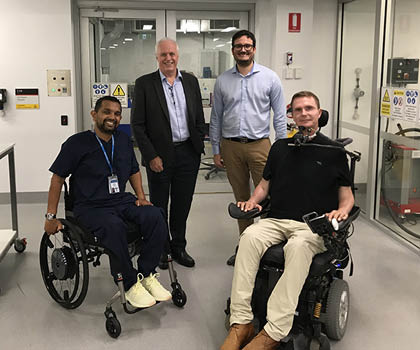 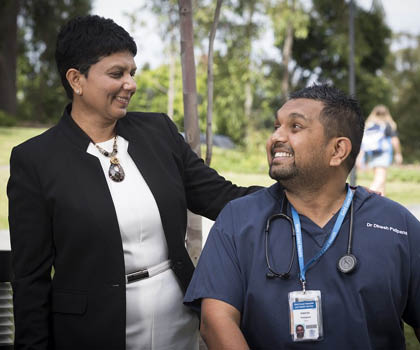 The impact of philanthropy

In a year of pandemic, Dr Palipana continues to spread himself thin and support his community by working at the Gold Coast University Hospital, leading globally relevant Griffith research into the rehabilitation of spinal injury patients, being admitted as a lawyer, supporting the next generation of medical students, facilitating philanthropic support, all whilst developing a growing reputation for his advocacy in the area of disability.

Despite his own daily struggles to breath, a permanent effect of his quadriplegia, and falling into a ‘high-risk’ category for COVID-19, shortly after the outbreak, Dr Palipana met with Griffith University’s philanthropic support teams to discuss how the University’s existing COVID-19 student support bursaries could potentially be extended to support further medical scholarships. Through Dinesh’s networks and connection with ‘Credabl’, he initiated a lucrative philanthropic venture to support ongoing spinal cord research and two new scholarship opportunities for Griffith students;

“I feel like I’ve done more in the last 10 years since the accident than I had in my life before so I probably don’t classify myself as someone with a disability!" Dr Palipana remarked.

“This journey is not something I’ve done alone. I’ve done it with the support of my close friends and family, which has been so important.”

Perry Cross, a donor to Griffith University’s spinal injury research and fellow quadriplegic, is a major supporter and admirer of Dr Palipina’s work.

“Dinesh’s story is pretty amazing, for someone in our situation, with limited function and mobility, to be able to not only understand and do the work that it takes to become a doctor, but it’s really amazing that physically he’s up to the challenge," Perry said.

His national and global impact has been recognised with numerous awards, including Junior Doctor of the Year, the Henry Viscardi Achievement Award and an Order of Australia.

In November 2020, he was awarded the title of 2021 Queensland Australian of the Year, ahead of the national Australia Day awards in January 2021.

“I hope that this incredible honour allows me the opportunity to give more back to our community,” he said.

Dr Dinesh Palipana remains humble, appreciative and positive. He is a role model for both disabled and able bodied alike, with the drive and passion to make real change.

“I think I have the best job in the world.”