From dropping out of high school and working as a labourer, to now communicating complex scientific concepts through his art and leading his own international arts company, Benjamin Werner has found his circuitous path to success.

Benjamin has just launched his latest large-scale mural at Dutton Park State School, where he was the 2019 Artist In Residence of the Science Mural Project. The enormous painting continues the strong theme through much of his work of synthesising science with art.

“I was selected as the Queensland Science Artist in Residence for 2019, so I was able to work closely with the researchers at the Dutton Park Ecoscience Precinct in Brisbane,” he says.

“It's something I've been playing with in my own arts practice, with my studio work, and my canvases, and my installations.

“Part of that residency was to have the mural encourage students to look at STEM. Jobs in science, technology and maths, and all those things.

Completing a Bachelor of Fine Art with Honours at Griffith University’s Queensland College of Art, made him realise that making educational artwork was his calling, and focussed his journey to success.

“It all definitely started at Griffith,” he says.

“My honours work was all about light, and light and dark, and it's been what I've kind of followed the last 15 years since graduating from my honours.

“I’ve explored into city lights and looking at cities all around the world, and slowly it's turned into looking at more natural events such as coral spawning, fireflies, bioluminescence. They become the lights when you photograph them and they look exactly like cities.

Prior to his 2019 Brisbane residency, in 2018, Benjamin had a residency in Singapore and exhibited at the Australian High Commission. He also was an active participant in the Hong Kong Art Fair, where he developed connections through the art handling network.

However Benjamin is not just an artist. He's also an entrepreneur as co-director of All City Walls and All City Art Services. These businesses are two branches of his vision to create contemporary creative murals on a vast scale, as well as support the preservation of art that is already in existence.

He employs many artists in Brisbane, financially supporting them and their families while enabling artists to keep creating their works. As a Brisbane based local business, Benjamin is proud to server an international market.

“My business partner, Yannick Blattner and I had been painting murals for a long time. We both had our own businesses painting them, and whenever we would get a big job, we would bring other artists in to help complete the jobs,” he says.

“We had the opportunity last year to work on a very large project for the Queen's Wharf, a new casino in Brisbane and to paint another artist's work, called Alice Lang, who resides in LA, another Brisbane artist. We had a meeting and we decided to finally put together our skills and form the company.

“Since then, we haven't stopped.” 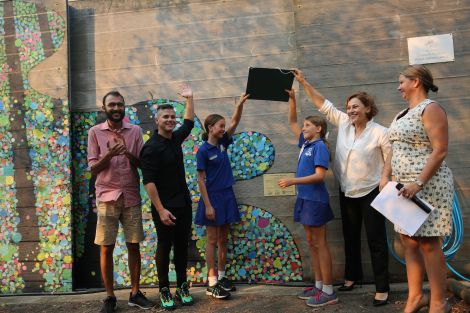 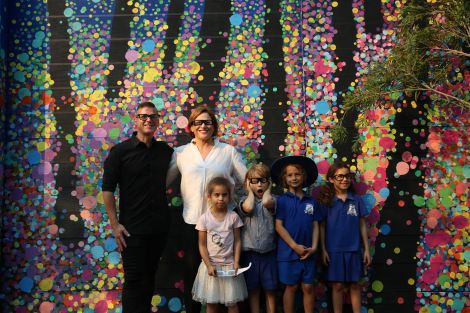 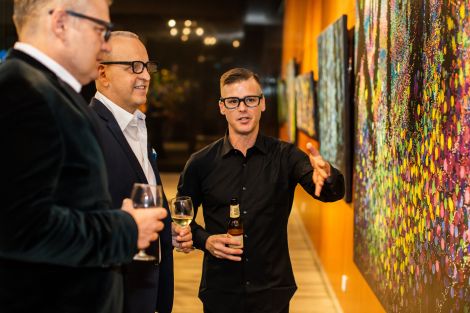 He’s excited at the possibilities the mural at Dutton Park State School will unfold for the students for many years to come.

“We had a participation day with the mural, where every class from the school came through and they split into two groups,” Ben says.

“One group had the 3-D glasses and the other half painted with my business partner and I. Their reactions to being able to paint with us and to see the mural come alive with the 3-D glasses was just awesome.

It’s a long way from when he was at school and not sure of what his future would bring.

“I never really did much drawing or any art at school. I left school quite young. I actually went out to work at 14 years old doing all the jobs you can think of. Whether it was jack hammering, mixing concrete, throwing bricks or driving forklifts,I did it all,” he says.

“Even in my Honours year at Griffith, I was driving a forklift in a warehouse.

He hopes his story encourages other creative people to pursue their dreams.

“Everyone's ready at a different time, and it doesn't matter what age you are,” he says.

“I know a lot of people have started painting a lot later than me and they're marvelous artists.”

Benjamin took some time out to chat with Griffith shortly before the official unveiling of the mural about his international career since graduating from Griffith.