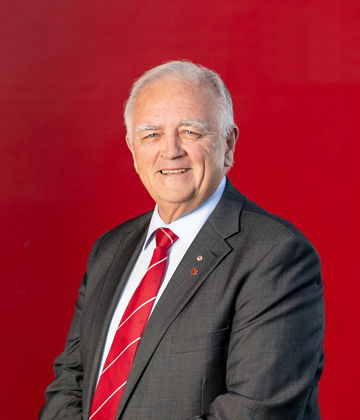 Mr Henry Smerdon AM DUniv is the University’s fifth Chancellor and is Chair of a number of key University Committees.

Prior to commencing as Chancellor on 1 June 2015, Mr Smerdon was the Deputy Chancellor of the University from September 2000 to May 2015. Mr Smerdon’s association with Griffith dates back to April 1997 when he was first appointed as a Governor in Council member of the University Council.  He was Chair of the Finance, Resources and Risk Committee from 2000 to 2015.

Mr Smerdon’s distinguished finance career dates back to the 1980s. He was a senior executive at Queensland Treasury, where he served as Under Treasurer and Under Secretary from 1989 to 1994.  He was the Chief Executive Officer of the Queensland Investment Corporation from 1995 to 1998. He was also the Government Statistician for Queensland from 1990 to 1995.

Mr Smerdon has been a member of and made significant contributions to many boards and committees over several decades, particularly in the finance, education and arts sectors. He was awarded the Centenary Medal in 2001 and his extensive contributions were recognised in 2010 when he was appointed a Member in the General Division of the Order of Australia (AM). His current directorships include Principal of Strategic and Financial Consulting Services; Director, National Trust of Australia (Qld); Chair AustSafe Super Ltd; Chair, Currumbin Wildlife Sanctuary Committee and Chair, Motor Accident Insurance Commission CTP Advisory Committee. Previously, his Board memberships have included Chair, Queensland Performing Arts Trust; Foundation Chair, Q-Invest Ltd; Chair, Government Superannuation Funds; Chair, Flagship Investments Ltd; Chair, Queensland Education Institute Ltd; Deputy Chair, Queensland Industry Development; member, South Bank Corporation; member, Suncorp Insurance and Finance; and  board member/CEO, Queensland Investment Corporation, to mention but a few.

Mr Smerdon is a member of the University Chancellors Council (UCC ). The UCC is the forum for the Chancellors of all public, not for profit universities in Australia to discuss key issues for the higher education sector.