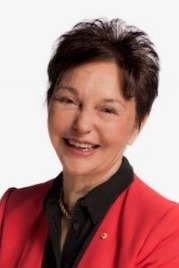 Rhonda White is co-founder of the Terry White Chemists Group.  Her visionary skills in developing the systems and disciplines for the brand have proven a critical ingredient in growing the franchise network to its current position.

Her dedication to the education and development of staff members at all levels of pharmacy became the driving force of the organisation.  In 2016 Terry White Chemists merged with the Chemmart pharmacy chain to create Terry White Chemmart - Australia’s largest retail pharmacy brand network, with a combined turnover of $2 billion and approximately 400 franchised pharmacies.

Rhonda graduated as a Pharmacist in 1963 (Queensland University of Technology) and currently has ownership in 4 pharmacies. She holds a Bachelor of Arts and Postgraduate Diploma in Organisational Psychology from the University of Queensland.

She is the Pro Chancellor and a Governor-in-Council  appointed member of Griffith University Council, a council member of the National Gallery of Australia and a board member of the Griffith Institute for Drug Discovery (GRIDD).

She was inducted into the Queensland Business Leaders Hall of Fame in 2011 in recognition of exceptional entrepreneurship and innovation in national retailing, and significant contributions to the community.

In 2013, she was appointed an Officer of the Order of Australia for distinguished service to the Pharmacy profession, particularly through contributions to education and retail practices and as a role model for women in business.